How sugar is processed?

Sugar is produced in over 120 countries; nearly 80% of sugar comes from sugar cane, with the remainder derived from sugar beets.

Sugar comes in a wide variety of forms. The most common is granulated sugar, also called table sugar, which is the most refined form. Granulated sugar with larger crystals is called coarse sugar; with smaller crystals, it is called superfine sugar.

• Harvesting. Sugar cane and sugar beets are typically harvested from fields mechanically. The harvested plant materials are frequently sieved to remove dirt and rocks before being loaded onto trucks and taken to the factory for processing.

• Washing and Initial Preparation. As soon as the sugar cane or sugar beets arrive at the factory, they are washed extensively. After washing, the sugar cane or sugar beets are conveyed into the factory using screws or belts. The sugar cane is crushed using swing-hammer shredders or heavily grooved crusher rollers. Sugar beets are cut using slicing machines, which tear them into strips smaller than French fries, called cossettes. The cossettes are soaked in hot water tanks, while the crushed sugar cane is sprayed with hot water. Both processes serve to swell the plant cells in preparation for extraction.

• Juice Extraction. The sugar cossettes are pumped into the bottom of tanks. A rotating shaft in the center transports the sugar beet strips upwards against the downward flow of water as the sugar is extracted. For sugar cane, milling is used to extract the juice. A series of five mills compresses the sugar cane fibers and separates the juice from the bagasse, which can be used later as a fuel source. The initial juice is dark green in color and is acidic and turbid. The juice is collected in large vats and the sugar concentration is measured.

• Purification of Juice. Tall towers are used to purify and lighten the color of the cane juice. The juice is introduced at the top of the tower and sulfur dioxide vapor is introduced at the bottom. The sulfur dioxide rises up through the tower in a process called sulfitation. Gas is added at 120 to 200 pounds per million pounds of juice. Carbonation or alkalization is used to further separate the soluble non-sugar materials from the sugar juice. Carbonation employs calcium carbonate or calcium sulfite to aid in precipitation. The juice is heated to denature the protein content and is then mixed with a slurry of calcium hydroxide, called milk of lime. Carbon dioxide gas bubbles can also be introduced in this step to lower the alkalinity and precipitate the carbonation sludge, which is filtered to purify the juice.

The clarified juice is then boiled in a series of vacuum evaporators until it reaches a concentration of 50%–65% sugar. Each subsequent evaporator in the series has a higher vacuum pressure than the previous evaporator, resulting in the sugar syrup boiling at progressively lower temperatures as it moves through the process. Sediment is skimmed off the top of the evaporators using paddle skimmers, producing a thick, nearly colorless sugar syrup.

• Crystallization. During the next step in the manufacturing process, a single-stage vacuum pan is used to evaporate the syrup until it is saturated with sugar crystals, which are formed through a process called seeding. A milky solution of pure sucrose suspended in alcohol and glycerin is the seed that is slowly added to the syrup. The small grains of sugar present in the solution serve as nuclei, helping to draw out the sugar in solution and convert it into crystals. As the mixture is boiled in a vacuum pan, water evaporates and sugar crystals continue to grow into a paste called massecuite, a dense mixture of syrup and sugar crystals. This mixture is then transferred into a large container called a crystallizer, where the massecuite is slowly stirred and cooled, continuing the crystallization process.

• Drying and Packaging. The damp sugar crystals are dried in large, hot air dryers, reaching a moisture content of as low as 0.02%. Next, the sugar is gently tumbled through heated air in a granulator. The dried crystals are then separated into different sizes through vibrating screens and placed into storage bins. Finally, the sugar is packaged for the consumer.

The Future of Sugar

Sugar is a versatile and critical food ingredient with a wide range of benefits. Not only does it provide foods with sweetness and flavor, it also adds aroma, color, texture, and shelf-life stability. The role sugar plays in continuing to make our lives sweeter is assured. 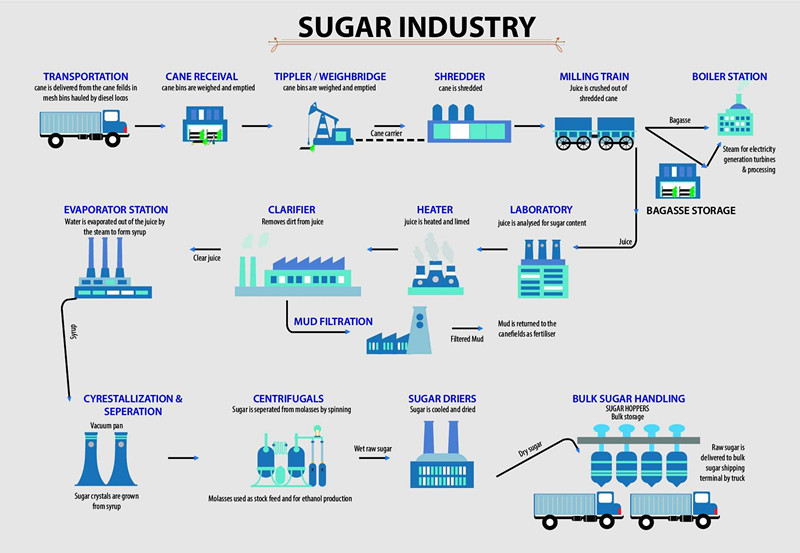